My Way or the Highway… to the Shelter

Matti is a very simple dog. He is shy but excitable, obedient but stupid. While he is occasionally a trouble maker, primarily as an instigator, he’s not a particularly difficult dog to live with. In a word, dude is one easy pooch. 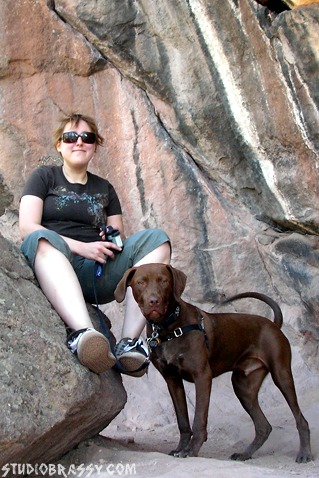 Tank, dear friends, is not like Matti. Tank is a Tank. Tank is a bulldozer. Tank is eternally excitable, very high energy, intelligent to frustration, and the sort of animal that you take on a hike up and back down Mt. Sanitas and at the end of two hours he wants to go again. There’s a lot of good to be said for all of that, but there’s far less good to be said about Tank’s reluctance to socialize with small children.

Tank is the kind of smartass smart dog that learns rules and breaks them every time he thinks he can get away with it. A lot of our dealing with that issue has centered on management. If there aren’t bad choices available, the dog won’t make bad choices. That’s a bit difficult to keep up though. He’s also prone to guarding, what with barking at the door, barking at the windows, barking at the fence, and occasionally giving a growl and a stern bark to the people around him when he doesn’t want to move. Clearly, that last one is kind of a big deal. A dog that  guards furniture in the house is a big problem. A dog that lives with toddlers and doesn’t mind handling by anybody EXCEPT the toddler, and will growl and tense up when she tries to pet him, is also a big problem. And possibly a bite waiting to happen. Try teaching a two year old to properly behave around dogs and stop trying to pet the dog she is madly in love with. Go ahead. I’ll wait. You’re probably gonna be awhile, though.

Watching the both of them like a hawk and dealing with the meltdowns and the confrontations when my back is turned dealing with something else was really getting to me. It wasn’t working. Something had to give.

For all of Tank’s Tankness, I’m really fond of that dog. I love that stupid dog. I almost never have a chance to just go out and walk him without anyone else, but that’s always been one of the most relaxing things for me. Just me and my buddy, Tank. And he walks so much  more nicely without Matti along. Too much excitement, I guess.

When we adopted that little 22-pound brown puppy, who sat so adorably on the tiny lawn chair in one of the shelter’s outdoor meeting pens, I was going through a bit of a rough patch. I had just been put on Prozac and I hadn’t yet discovered Yoga and how awesome it would be for me. That little brown puppy turned out to be a lot more challenging than we had initially anticipated, but it was definitely rewarding and the experience changed me. Call it trite; I don’t care. My dog changed my life. My outlook changed for the better. Tank is outgoing, vibrant, smiley, and friendly. Well, when he’s not freaking out about bunnies, the neighbor’s dogs, or Pixie touching him. Let’s just say that he means a lot to me.

So we went to a behaviour and training specialist at the shelter we originally got him from. It was somewhat expensive, but necessary. With the question of whether or not he’d be safe to keep, or manageable with two kids and less time, I knew I couldn’t forgive myself if we gave him up without at least trying to work it out with a professional. I’m glad we did, because nothing is set in stone yet, but her evaluation had some hope. There’s a ton of training work for us to do, and we had to do some rearranging of the house and how I manage kids and dogs during the day by myself, but there’s already been an improvement this week. We ain’t out of the woods yet, but things are going better than I thought they would. Tank is a smart pooch and he really does respond well to increased structure and consistent expectations. As much as he likes doing whatever he pleases, he is happy living with stricter rules.

Now if you’ll excuse me, there is a little 70-pound brown dog under my desk and I think he could use some scritchies.