This Stinky Toy is Awesome! 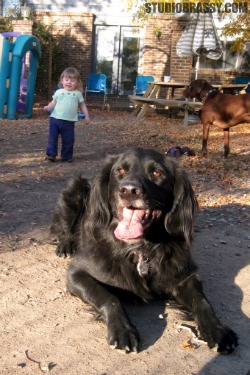 If you recall, Tank is not a huge fan of children (or quiet), though since working with an Animal Behaviourist at the beginning of last summer, he’s come a long way. It was actually a very quick turn around, and I’m beyond glad we were able to keep him AND have it safe for everyone.

However, while his patience has dramatically improved, he still is not enamored with the poking and prodding attention of little humans. Matti is less perturbed by them, which is somewhat odd considering his default mode is Afraid of Everything*. As is the way of children, they are less fond of the more placid dog and are instead obsessed with Tank. He is one of their favorite things, living or toy, ever.

I will grant that Tank is an excellent snuggler, and has pretty much the softest ears known to man, and sometimes he has that calming “dog smell” when you snuffle his head. Other times he has that more typical, fairly rank “dog smell”. The kind from his butt. That dog can clear a room, and how! Sometimes, he wanders over, let’s one rip, sniffs his own butt, and promptly wanders off again. THANKS, DOG. Stay classy!

Or maybe he reminds them of Daddy.

*After adopting him, I brought Matti home and discovered that he was afraid of stairs. Not just flights of stairs, either. There is one single, dastardly step in our garage leading inside the house. 6 month old Matti needed some love and encouragement to brave such a foreign obstacle. To actually ascend the half flights inside the house, I had to resort to hot dogs. Things that bring your dog food are usually perceived kindly, so pairing treats with new things like a harness, vest, guests, or other potentially fear-inducing stimuli helps break the ice. I just never thought I’d have to use that tactic for stairs.