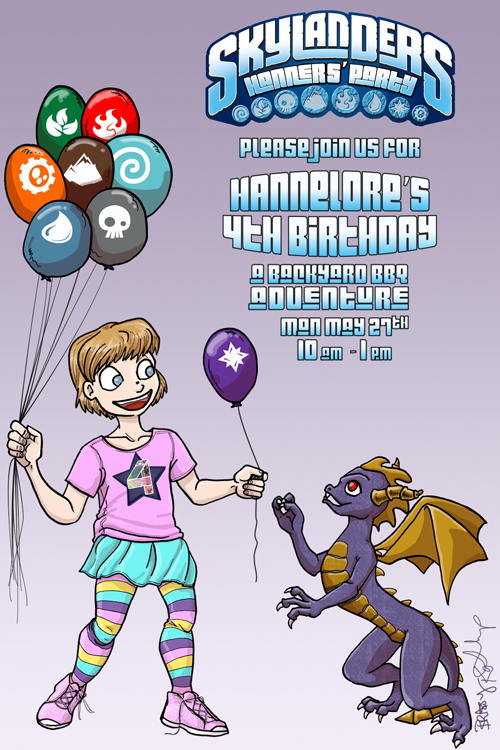 Little Miss Pixie loves to watch anyone play Skylanders, especially if they’ll let her swap the figures on the portal for them. She also likes to steal all of the Skylanders figures and play with them in her little dollhouses. They like to have parties. So when I asked her what kind of party she wanted for her birthday she was very clear: a purple Skylanders party.

I drew her invite because of course I did. I also got balloons in all the colors of the Skylanders elements, tied them up on a string to hang like a banner (no helium, yo) and drew the elements on them with a Sharpie (except the Undead was a black balloon so I used a white paint pen, and it also turned out to be both Daddy and Pixie’s favorite). I got purple paper plates and such because I don’t wash dishes after parties. Sorry, mother earth.

But I just don’t.

I also got some customizable kid-sized travel mugs at the dollar store, scanned in the template inside, and printed out a templated coloring page for each kid. They got to pick which Skylanders elemental group and their coloring page has the template so they can cut it out to size when they’re done.

We had burgers and hot dogs and homemade potato salad, and my super weird, kinda-runny primal “macaroni” salad. I’ll write up a recipe if I ever get the darn thing perfected. I like it, but it’s not quite right. Oh, and bacon. I made 3 pounds of bacon for 20 people and was surprised that there was some left.

It’s like I don’t even know these people anymore.

My sister made a gluten-free cake and cupcakes, and decorated them with homemade buttercream icing. The cake was Spyro the dragon, blowing fireballs. The cupcakes were the sheep from Skylanders, and as cute as could possibly be. She even set some of the sheep next to the Spyro cake and sprinkled red sugar crystals on top so they were “on fire”. Let me tell you: “on fire” was a popular request. After the first kids snagged the fire ones, Auntie Red had to pull out the sprinkles and light up a few more!

I had to send people home with cake because we had so much cake leftover. You might think that’s a great problem to have, but my DailyBurn calorie counting app says it’s not and I’m sure it wouldn’t lie to me. Probably. Even sending chunks of cake away (there were absolutely zero sheep cupcakes left) I still have cake.

Oh, who am I kidding. Y’all know I’m actually eating that cake for dinner. I’m probably lucky I’m not just shoveling it into my face right this second. I mean, have you ever tried to wipe buttercream out of your keyboard?