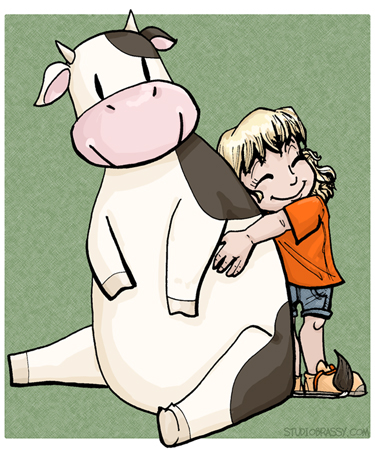 I’m pretty much in love with Harvest Moon, after picking up Harvest Moon: Animal Parade for the Wii for $15 after Christmas. I used to play FarmVille on Facebook, but Zynga’s privacy policies are fairly dystopian. So at the time, I would have itty bitty baby Hanners on my lap and we’d talk about the animals. She loved it, and I was addicted to the clicky. The Hubbles was appalled that I would waste time, energy, and my email address on such pursuits and recommended Harvest Moon. Two years later, I finally tried it and HE WAS RIGHT. Farming, animals, mining, fishing, cooking, build your home, UPGRADES, make friends, adopt a pet! This game is so much better. My virtual life is both pretty and pretty fulfilling.

“Why don’t you do some actual gardening?” he asks, as I slump on the sofa, covered in wiggly children. Uh, because it’s SNOWING* still? Also, gardening is a considerably larger energy expenditure than holding the Wiimote and pushing a button. Lest you think I ignore my kids all day to work a virtual farm, I only ignore them for parts of the day and do most of my gaming after their bed time. I kid! Actually, Pixie really likes the game and engages with it. We talk about what’s happening, name things and activities, and other stuff like that. I also named the cow “Bubbles,” which is just about her favorite thing right now. I think if you make it a consideration, just about any activity you do can be something “educational” for your kid. The flip-side is true, too. Take an activity other parents and caregivers are using as a teaching tool, but don’t bother to engage with your kid with it, and there you go. You can’t expect a toy or TV show to do all of the work. Possibly the silliest part of Harvest Moon is riding your non-equestrian farm animals. Bubbles the cow is our faithful stead, though Hubbles is not convinced she’s any faster than walking. He may mock our ruminant friend, but Pixie is delighted when we ride the cow. Ride how!, she says. Sometimes she gets it right and says cow. She’s in speech therapy and making progress. Anything that gets her talking is good!**

*This post was originally written in March, when it was indeed still snowing.

**As an aside, her language skills started picking up after we changed her diet, before she even started therapy. She has multiple food sensitivites, and she is especially sensitive to gluten. From removing and re-challenging with different foods multiple times (also called “eliminate and challenge” by our pediatrician and other resources), we can see that gluten (among other foods, but seems to be the biggest offender) has a huge negative impact on her behaviour and on how verbal she is. But it’s pretty common: kids that feel like crap are crabby and less talkative. She is far happier these days!