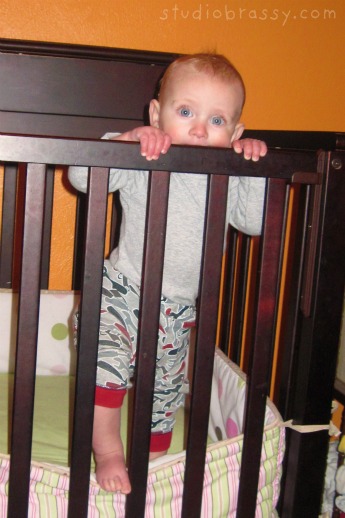 At 2 and 1/2, it was pretty much well beyond time for Pixie to be out of her crib. She has some hip and spine problems, so she never got her leg up onto the crib rail to try to escape like your average 18 month old. I co-sleep, so Chappy would spend part of each night in my bed, and part in his bassinet. Then he got too old for the bassinet and was at risk of tossing himself over the edge. Probably because it looks like fun. We had my 11 year old niece’s crib handed down to us, but it had either broken in storage or in transit, so Chappy moved to the playpen instead.

Not surprisingly, he prefers sleeping with mom to the playpen.

Hubbles moved Pixie’s crib into Chappy’s room three nights ago, and Pixie has been exclusively sleeping in her Big Girl Bed. This has been the death-blow to her rapidly burning out afternoon nap. It’s one less thing to plan around, but skipping naps does not generally improve that child’s patience and tolerance.

The first night in her Big Girl Bed went perfectly! I tucked her in, read her a story, kissies, lights out, DONE. She didn’t even get out of bed until morning.

Night two, she fell out of her bed around midnight and her crying woke Chappy down the hall. I had to lay in bed with her to get her back to sleep before I could go get the other one. Chappy came back to bed with me and there was no more excitement for the night.

Then night three. Or as I like to call it: the one with ALL THE SCREAMING. Having not napped, and been uncomfortable from a molar coming in and another damned diaper rash, Pixie was melty. Like a popsicle in the rain, but with less corn syrup. I took her to bed, blah blah, story, blah, and as I went to leave it started.

“Jam?” and pointing to a pile of stuff, which most certainly did not contain jam. Hell, not even preserves. Four guesses later, and jam means her slippers with the does on the toes – because in the Pajama Jam song on Mickey Mouse, they dance in their PJs with slippers on! That is her favorite song. She’ll dance and sing out “Jam, jam, jam!” with them. Her second favorite is the end theme Hot Dog Dance, where she tries to shriek HAAWWWWT DAAAWWWGGG! as loud as she possibly can.

So she gets her slippers on, then asks “door?”

No, baby, I’m going to close the door and you will go night-night.

I had to fix her slippers about three times, since they kept falling off in bed. Then I went downstairs and the protests started. With screaming. It’s like she learned her debate technique from political news coverage. Soon she gave up screaming and opened her door. There’s a baby gate up, so she starts throwing her toys and blankets out over it into the hallway. She would do this when in her crib before, too. I have no idea why, because all that happens is she winds up still in bed, but without any toys or water. Downstairs, I could hear her squawk every so often between bouts of silence. A few minutes after I thought she was asleep, I hear her pitter patter and, look! There’s a Pixie at the top of the stairs!

“What are you doing out of bed?”

She startled, giggled, and ran back down the hallway. You know, to hide and look for more trouble to get into. She’d managed to knock the gate down, probably when trying to toss her blankets over. (Duh, not like I’ll need these blankets since I’m NOT GOING TO BED, MOM.)

Back to bed again, and there she stayed. Finally.

On the Chappy front, let me just say that he’s not so fond of the crib, and he fell asleep sitting up, face in the corner, hands on the bars. My poor, jailed little Chap. He still nurses once (or so…) during the night, and I’m far too lazy to get up for that. I can go get him, and “I” usually means Hubbles, especially if it’s cold, but I’m nursing that kid in bed. Where it’s warm, and snuggly, and we can fall back asleep together. Y’all, being able to nurse in your sleep is just one more area nursing wins on convenience.