Sunday was a major improvement! We had Gramma’s help all day, Chappy was still sick but far improved, errands were run, children were bathed, and dishes were washed. Soy eggnog was also obtained, as neither Gramma nor I can tolerate dairy properly (which makes my love of cheese a fairly gastrointestinally abusive relationship).

I’d like to end this update there, but we had more minor excitement, and I’m not referring to our trip to Walmart.

The six of us, two aging, tired ladies, two little children, and two active pooches, went out back to frolic in the fall* afternoon sun. In the spirit of full disclosure, the frolicking may have been limited to Pixie, Tank, and Matti. One moment, Pixie is picking individual rocks up off the cement path, and the next she is crouched down crying in a panic. 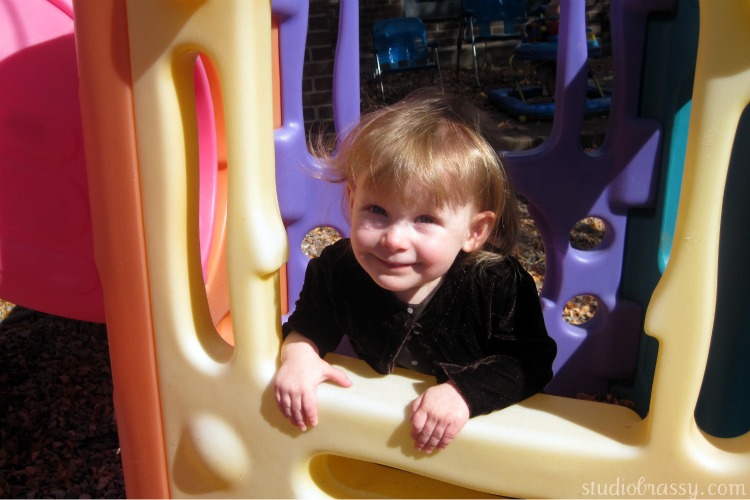 I run over to her, ask if something hurts, and she puts her thumb in my hand. I guess she picked up a bee, or a wasp, or goodness-knows-what. Whatever it was, there was a little red mark, no stinger left behind, and a pretty clear allergic reaction as her thumb swelled to about 3 times its normal size. While waiting for the on-call pediatrician to call me back with instructions and the appropriate benadryl dose, the redness started spreading down into her palm. Awesome.

Fortunately, her reaction to whatever-it-was wasn’t severe. No anaphylaxis or excessive excitement like that. She got her benadryl, the swelling subsided considerably, and she went about her evening as her normal, adorable self. Our sick little Chappy even refrained from adding to the stress and commotion! How considerate, right?

I’m not quite done yet, though the last noteworthy experience is decidely domestic, and probably irrelevant to most of you. But it oughtn’t to be, because it’s about brownies, and who doesn’t love a good brownie, especially after a crappy weekend?

Now that I have your interest, I’ll admit that they were black bean brownies**, at which point I think a good number of you are rolling your eyes and moving on to more exciting things on the internet, like My Little Pony memes. But, guys! Black bean brownies are delicious! No, really. I love them. Unfortunately, they take butter and eggs, which don’t particularly bother me, but attack poor Gramma out of spite and meanness. It was her last night here, and she’d be off to work again early, so I wanted to make a treat that she could enjoy as well.

So, being brilliant, I decided to try substituting for both offending ingredients, and doubling the batch. For good measure.

Experienced bakers are free to laugh at me now.  We’ll note that they came out a little like… chocolate sludge? And we’ll note that one should generally only experiment with one substitution at a time, and certainly not while doubling the recipe.

But it’s not a total loss. Pixie is not particularly picky, and a glop of cocoa and beans is a big hit.

*Note: the delay between real happenings and actually appearing on the blog is something like 6 weeks on this one. However, you get a touch of realism because after the first two posts in this story, Pixie got sick with something very similar to whatever Chappy had! Yeah, it was a cruddy weekend. But at least Hubbles was home so Pixie got to spend pretty much the entire weekend on her Daddy’s lap.

**Please note that the recipe for Black Bean Brownies is missing a part in the instructions. She says to add the black beans and the butter to the food processor, and it should also mention that you need to add your sugar and eggs at the same time. I do highly recommend this recipe, even though it didn’t stand up well to my fiddling.