It was just before the sun rose the next day that Filadelfo the Frosty made his way up Walker Hill. When Lady Celeste had said that David Wallace lived on the hill, the wizard hadn’t thought anything of it. Many people lived on the several hills that made up the northern portion of Port Faust. Filadelfo himself lived on the side of one hill that gave him a spectacular view of the bay. His target, however, didn’t just live on a hill. He owned it. The entire tree-covered hill belonged to the artisan. His mansion was unseen from town, and if it weren’t for the road leading uphill, no one would think there was anything up there except trees. 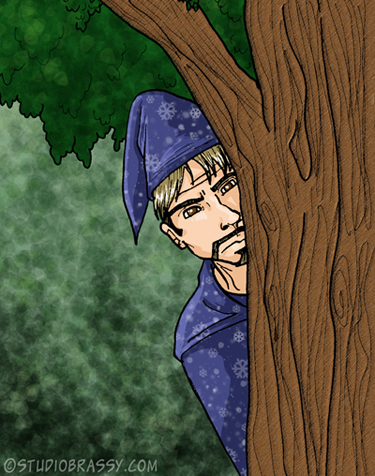 The wizard’s client had given him a small map of the estate that she had sketched from memory, based on the two times she had been inside. The two-story home was encircled with a low stone wall that surrounded a well-maintained lawn and geometric flagstones that formed a path around the building. A few apple trees could be found in the corners of the yard. Before the sun rose that day, Filadelfo had a place of cover behind a tree, just beyond the northwest corner of the property. Lady Celeste had warned him that his target usually stayed up until the wee hours of the morning, and the guards were the most active at night as well. Approximately an hour after sunrise, there was a shift change, and the guards tended to stay by the two entrances to the home rather than wander. Filadelfo settled in to observe his objective while he waited for dawn and the changing of the guard. A slight breeze carried the wonderful scent of bread baking to his nose.

As he watched, the only light came from the open back door of the building, which his map said was the kitchen, and from torches set at each corner of the building. A guard was walking up the flagstone path, which was made of circular and triangular stones, along the west side of the home. His stride seemed kind of odd, but Filadelfo couldn’t quite put his finger on why it seemed wrong. As the guard approached the open back door, he stuck his head inside and greeted someone. Moments later he resumed his patrol, now munching on what appeared to be a freshly baked roll. On a stone bench just next to the door, sat what appeared to be another guard, arms crossed and back slumped against the wall, but the first guard hadn’t so much as glanced at him.

The guard made three more circuits of the house, but other than talking with the cook or cooks in the kitchen he did nothing unusual other than walking funny. During this time, Filadelfo had maneuvered around the perimeter looking for weak points. Besides the open rear door and its guard, he noted the front door with two guards standing vigilant, and several darkened windows around the home. All the windows were closed except for one in the northwest corner of the building. The window facing west was propped open, but it was also right next to a burning torch.

An hour after dawn, he heard a small commotion at the front of the house. Shortly after, a new guard came striding up the flagstone path, also with a strange stagger in her step. As she walked along, she extinguished the torch at the corner of the building. When she got to the back door, she bent down, picked up the sitting guard and tossed him over shoulder. She then carried the now-obvious mannequin into the house. She returned a moment later and took a seat on the bench where the dummy had been sitting all night.

A dummy?! Filadelfo fumed silently. I cannot believe I fell for that!

When it appeared the guard was going to be seated for awhile, Filadelfo silently moved south until the guard was out of view. He closed his eyes for a moment and searched with his senses. He didn’t detect a magical barrier around the property, but something was setting off his danger sense. Looking around him, he spied a squirrel in a nearby tree. Thinking fast, he stunned the creature with a small ice bolt. Grabbing it off the ground, he tossed it across the waist-high wall and flinched; half expecting an explosion or alarm. When nothing happened, he quickly hopped over the stone wall and sprinted for the open window. He carefully pushed the window all the way open and tried to pull himself up. His first attempt failed and as his feet hit the ground, he heard a soft click. He immediately looked down to see the heel of one foot on one of the triangular flagstones. A cacophonous sound arose from under the now-tilted tile just as Filadelfo realized he had stepped on a trap.

“Crap!” Filadelfo muttered to himself as he launched himself through the open window. He reached up and pushed it closed just before guards came running around the north and south corners. He huddled in the darkness of the room he had landed in, as he listened to the thudding of the guards’ feet. 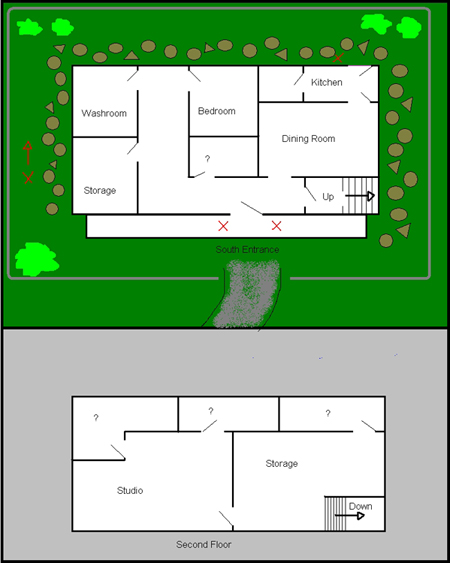 “What’s going on?”
“Who tripped the alarm?”
“We came around the corner at the same time, moron!”

A chittering sound interrupted the guards.

“Look! It’s a squirrel. He must have set it off.”
“I guess… I thought we had these weighted so birds and other critters wouldn’t trigger the tiles?”
“Maybe he hit it just right?”
“Perhaps. Take a look around. I’m going to check the tree line.”

Filadelfo listened breathlessly as he heard the guards move away. As his eyes slowly became adjusted to the dim light in the room, he looked around. He realized he was in a wash room. A large marble tub sat on six wide legs along the south wall of the room. It looked big enough to comfortably hold three people. A marble sink and toilet were also in the room. Filadelfo had heard of these new marble toilets, but this was the first time he had seen one close up. He stood up and moved quietly to the open door. He took a moment and closed his eyes again. He felt a powerful aura of magic above him and a slight sensation from below. Taking a breath, he peeked around the open door. Directly across the hall was another open door. It appeared to lead to a bed chamber. The hall led south where there was another closed door on the same side of the hall as the wash room, and then the hall made a turn to the left. On his small map, the room with the closed door was marked as storage.