Our adventure continues! Missed the previous installments? Check out PART ONE, PART TWO, and PART THREE!

The team spent the next hour searching the rest of the ship. Although they found a few pockets of Wolf Spiders, and even one more Crab Soldier, they didn’t find any serious threats. Mostly what they found where hundreds of toy packages strewn across the ship, the wrapping partially shredded. After making sure all of the Arachnos troops had been tagged and transported to prison, the trio reported back to Detective Davids with their findings.

“I just can’t thank you enough!” Davids enthused. “That was an outstanding job. I’ve already sent a couple units over to the ship to secure it until the Foundation can arrive and determine how they want to handle all those packages.” He paused for a moment. “Say, you didn’t happen to find out any reason WHY Arachnos was stealing toys, did you?”

The detective chuckled. “Heh. I don’t doubt it. Ah, well. That’s what interrogation is for, right?” He laughed again. “What a strange end to the week. Let’s hope the weekend is quieter, eh? Thank you again for you help, and Merry Christmas!”

“Merry Christmas to you as well,” Cholma echoed. “Let me know, if you turn up any more leads with these guys.” The three friends waved goodbye to the detective and headed off. Saying their own goodbyes, the three friends departed and made their way to whatever plans they had for the evening. 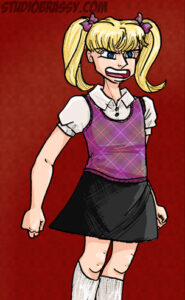 Four days later, a cold Christmas morning arrived on the Rogue Isles. Amongst the various screams of delight from children across the islands, there came a plaintive wail from a young girl on the capital island of Grandville. Inside the home of Lord Recluse himself, an inconsolable little girl wailed her heart out. Tears streaming down her face, sobbing uncontrollably, her father tried his best to calm her down. It wasn’t something the ruler of all Arachnos was used to.

“Sofia! Darling! Please don’t cry. Look at all these wonderful gifts you’ve received!” He waved his hand across the room which was literally cluttered with almost every popular toy of the season. All had been opened and quickly cast aside as little Sofia moved on to the next package, her desire for one particular gift growing stronger with each package she had opened. Sofia’s cries grew louder. “Sweetheart, please! Daddy tried his best, but there’s just some things not even I can do. There’s just,” his voice broke as he tried to speak the words that announced his greatest failure:

“There’s just no Nintendo Wii consoles to be found anywhere.”