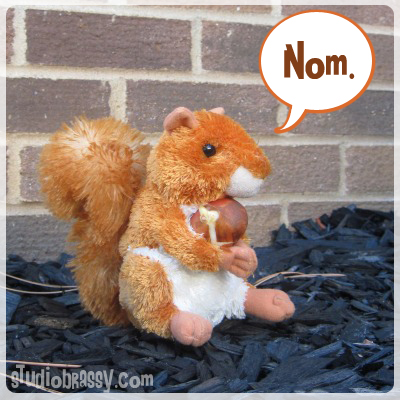 Last November, I planted something like 75 crocus bulbs in my front yard at the end of October. When they bloomed in early May, I got about 4 or 5 actual flowers. Several days after planting, I noticed little depressions in the dirt. Uh oh. Was it just settling from having dug and planted recently, or was it something more… sinister?

By sinister, of course I mean rabbits and squirrels, which like to frolic through my front yard (much to Tank’s conflicting delight and consternation, as he whines at the front window at them). I’ve read that they also like to eat bulbs. It’s a good thing that these guys are fluffy and cute, and that it’s illegal to take the rifle out front and shoot the bastards. But my lovely neighbor heard of my bulb troubles and recommended a very easy solution: red pepper flakes.

A huge plastic container of red pepper flakes is about $3.50 at the local bulk goods store (which is also where I bought my bulbs), so that was great. I also needed fill dirt, compost/fertilizer, and mulch, all of which were used to great effect in my planters by the front door. Years of drainage had done a number on the larger flower bed, and now it doesn’t make me want to set fire to anything when I see it! That’s a win, guys.

So far, no telltale depressions in the flower beds. We’ll see next Spring how well this works out, but I’m optimistic. At the very least, the flower bed is now even.