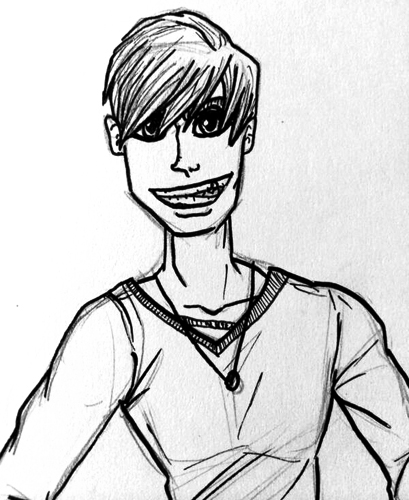 I’ve been posting a lot of sketches on Twitter later, and I know that for some of you it’s really hard to see the images there because you read on your phone, and then it’s gone into the ether. Or you are a Luddite and hate Twitter.

So if you follow me on Twitter, you’re still going to see sketches way sooner over there, but I did want to start posting some of those here. I’m open to opinions on this – if people feel like it’s overkill rather than helpful, I am more than happy to limit the sketches to just Twitter. The blog automatically cross-posts to Facebook and Tumblr, so I can see where it could be a bit much. Nobody wants to see the same thing 5 times!

I’ll start you off with some Kevin art because he’s been getting yet another make over this week. He’s pretty much set now. I’m working on getting his facial structure consistent, since sometimes his cheeks and jaw look too soft, feminine, or too young, but his new hair, eyeliner, piercings, etc – all set. So if you don’t like ’em, too bad! Ha!

This is one of the first new sketches I did. I like his jawline, but his hair’s not quite right. Too poofy on top. Nose isn’t quite on model either, but pretty close.