How Does Your Garden Grow? Sugar Snap Pea Edition

This year my garden has been a bit… lackluster. In the spring I weeded, and tilled, and I did not bother putting compost down again this year because I apparently don’t want anything to grow. I also did not put Preen down early enough (I always worry it will mess with my vegetable seeds) so the garden was overgrown with weeds for quite awhile.

Not entirely true… overgrown with weeds and strawberry plants. Long story short: I got very, very few strawberries this year (and about two last year) but keeping up with the runners is a constant battle.

The lettuces never came up at all, a fraction of the carrots came up, I have a couple of tiny cucumber bushes (I’ve gotten three whole cucumbers!) and my nine tomato plants have a handful of green tomatoes and that is all. Not a single red tomato plant, and it’s the end of August! Even my squashes have yet to produce, and I was inundated with them last year. What I’ve gotten the most of is Sugar Snap Peas. 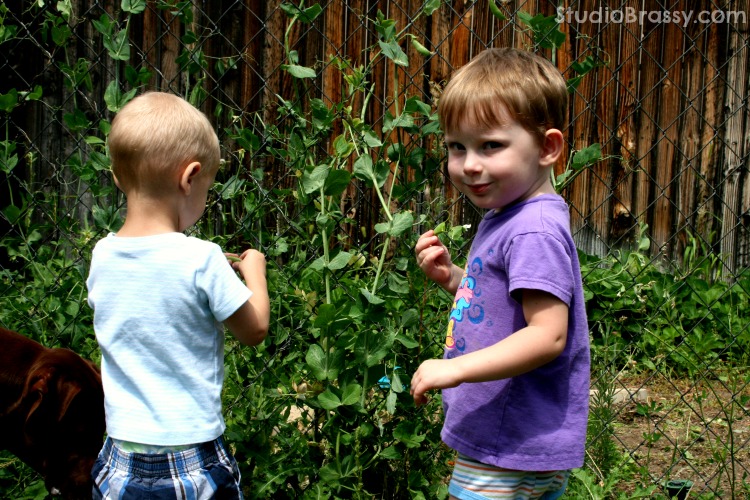 I wouldn’t say that I’m buried in them, like I know peas and green beans usually are like, but I’ve had enough to snack on and give the kids the experience of gardening. They were also really easy to trellis. Once they started snaking across the ground I guided them to the fence and they just grabbed on. The ones that weren’t tall enough at first I used little sticks to give them a bridge over to the fence (maybe 6 inches).

The other reason I don’t have many sugar snap peas is because they are accessible from the outside of the fence, and this guy has been chewing the vines to get the peas. 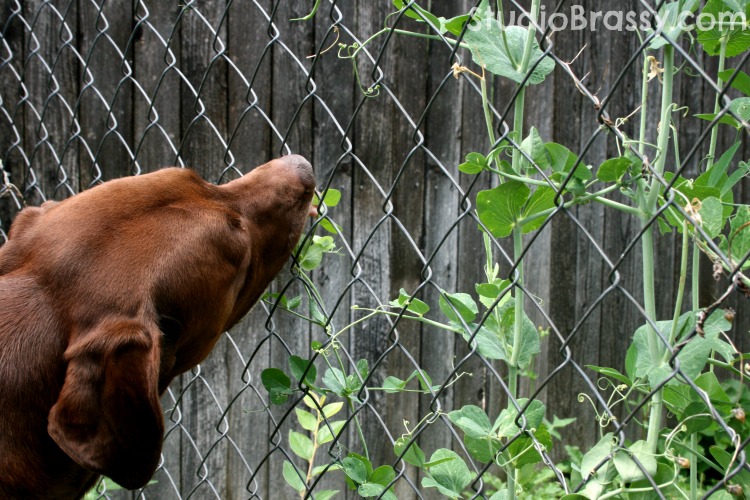 Thanks, Tank! Even dogs need to eat their veggies, right?