I love board games but don’t have a lot of time for a traditional game night. When I was a kid, like middle and high school ages, we had Game Night with my mom. We all played video games, including my parents, but on Game Night we pulled out a board game and had treats like chocolate-covered mixed nuts and skittles. It was special. I want to have the same thing with my kids, but Candy Land drives me nuts, no chocolate coating required. I know I have to play pre-k games with them so they’ll learn how games work and develop a love for gaming (besides the whole learning aspect and just bonding with them with things they like), but man. Candy Land is not particularly exciting.

You know what’s more my speed? Ticket to Ride (and Settlers of Catan, and Tigris & Euphrates, and so on). Some lovely friends introduced us to it awhile back, in its traditional tabletop form, and it was a blast. However, it also has about 200 tiny train pieces and many assorted cards for small children to gnaw on. Plus, all players need to be in the same room. At the same time! Crazy talk. So Biiku got me the Ticket to Ride iPad app, which shares a game server with Steam (PC) users so I can play solo, pass and play with friends in the same room, online with strangers, or online with friends (on EITHER OS!) no matter where they are. Like, say, California (where Biiku is). 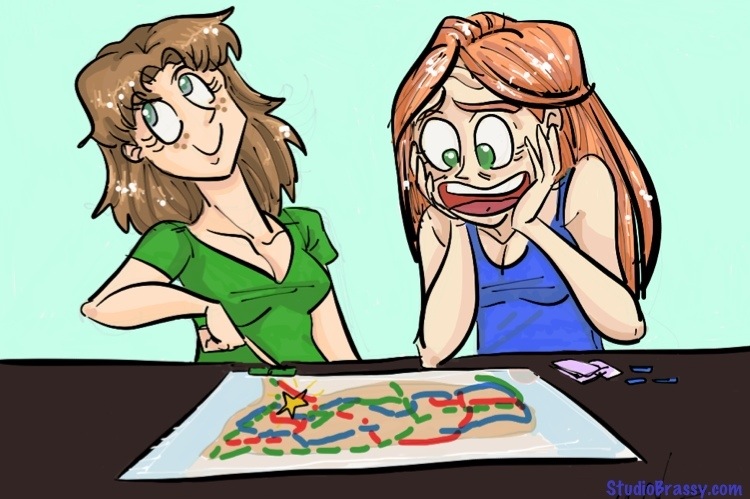 We’ve gotten a few other friends to download the app, and even our mothers! Not that they play with us. But the Steam app was on sale via Amazon recently and apparently $9 is well worth having your daughters just shut up already, I bought it, okay?! I played a round with Gramma using the pass and play mode on the iPad, and she kicked my butt even though she’d never played before. Some people mistake me for being “good” at games because they have not had to play Gramma, bless their hearts.