These Boots Were Made for Science Workin’ 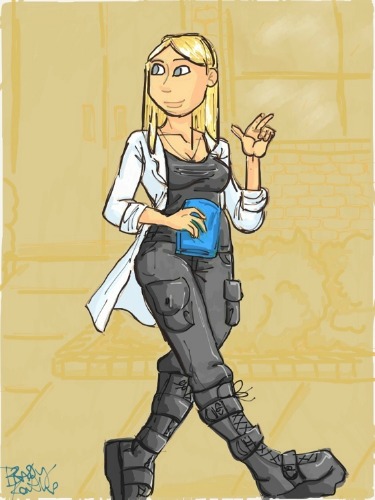 When I finally reached my last semester in college, I almost chickened out of graduating. There were so many cool classes I still wanted to take, and I hadn’t realized how bloody close I was to a minor in Biochem soon enough to do anything about it. But tuition kept going up and I was working part time doing QA/RA for a medical device company affectionately nicknamed The Tweezer Factory by my boss (we made some amazingly cool cauterizing surgical forceps used for things like brain surgery; no big deal). As much as I liked it, since I have a slightly embarrassing penchant for meticulous paperwork, it was certainly not paying enough for me to screw around at a University for another semester or two just to coddle my love of academia.

With student loans in hand, I graduated with a BA in Molecular, Cellular, and Developmental Biology, and the fact we weren’t awarded BS degrees even though majors like Journalism got a BS was, you guessed it, total BS. I mean, BA.

I got a job as a lab tech working for a really wonderful Post-Doc in a small lab group that was located at the VA Hospital. Have you ever been to a Veteran Affairs Hospital? They are a vital service and they are also under-served, over-booked, and depressing as hell. My job was a grant-based, short term contract position, so I was only there for a little over a year but it was long enough to be familiar to some of the regulars, the Vets who were there depressingly often. I sort of have SUCKER stamped on my forehead in invisible ink, so I would always try to make time to at least say hello to the folks who wanted to chat.

This outfit was pretty typical for me at the time. We wore our lab coats in the lab for the obvious reasons, plus they look pretty cool. It was suggested that we not wear them out of the lab because sometimes the Residents would take offense. Having been told this, and it not being an actual rule, I wore my  lab coat out frequently. Because forget Residents with fragile egos, that’s why. I also owned a pair of absolutely ridiculous goth boots that I wore daily. They had a fat raised platform with screws in the sides, because why not, combat boot style lacing up the front, and fat buckles strapped on. Pair it all with black fatigues from the army surplus store and a black tank top, and nobody was mistaking me for a med student anytime soon. I did get a few delighted comments from the Vets that they suddenly thought science must be very cool indeed. Yes, in case you were wondering, science is very cool.