Things (Babies) Are Heating Up for Day Three

Day Three started early. At 4:30 am, I was abruptly woken by the little ball of fire sharing my bed. He was thrashy, whimpering, and his last dose of ibuprofen was now completely worn off. I immediately got out of bed with him and checked his temperature. As undignified as the experience is, he was so miserable he didn’t even care.

Gramma, who was due to get up in an hour for work, was about to start her day very early indeed. Chappy went into a lukewarm tub for a few minutes, was remedicated, and his temperature quickly dropped to 102.1. Never thought I’d be relieved to see that pop up on a thermometer, but there you go. My life since we were first expecting Pixie has become a collection of similar weird juxtapositions. For example, at some point during a pregnancy, late but not nearly late enough, a woman will likely find herself thinking, “God, I hope I just peed myself.”

By 6 am, Chappy’s fever was under control (though still going), and I checked in with the pediatrician’s office. He didn’t need to go in yet, so that was good. Gramma had to go in to work, but she dropped Pixie off at her house en route. Pixie got to spend the day playing with her cousins, Auntie Red got an unexpected little guest, and this momma went back to bed with her very sick little boy. Gramma, unfortunately, did not get more sleep that morning.

Even with a sick little baby, this was a delightfully low-key Saturday. I was able to focus on the baby, and Tank was off at doggy day camp getting worn out. Matti is far easier to handle, and much quieter. He does take on some of Tank’s self-imposed guard duties when the loud-butt in question is gone, though. Matti is a better guarder, I think, since he will bark to alert you and then, when you’ve acknowledged it, he will SHUT THE HELL UP. 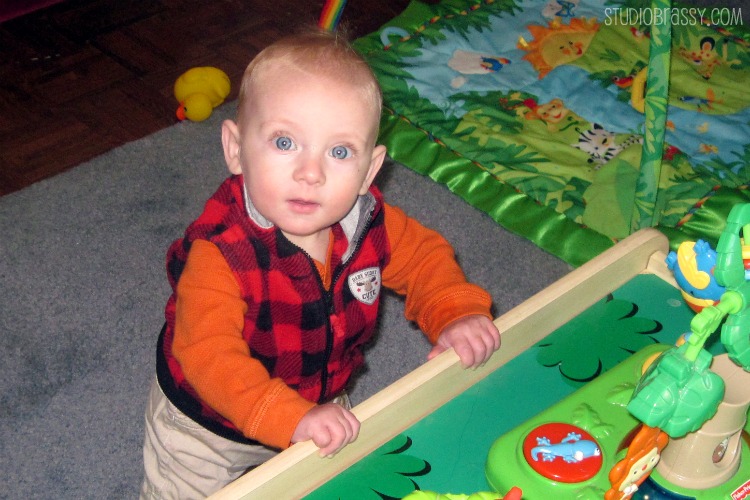 Chappy did very well on his medications, napped a lot, managed to play a little in between, and we even got the grocery shopping done. Seriously: you have one kid, and suddenly the simplest errands are a hassle. Everything takes longer. Then you have two kids, and now taking one kid out for errands is magically easy. You hear it all the time, but you don’t really “get” it until you’ve spent 20 minutes getting everyone changed, ready, and buckled in, but one of the kids has a poop RIGHT THEN and you have to start all over again. By the time you’re again ready to get out the door, someone’s hungry, tired, crying, or all of the above, and, oh wait, IT’S YOU.

Tank came home, we had yams for dinner, and at some point were finally able to bid Day Three goodbye for sweet, sweet oblivion. MAN, do I love sleep. Sometimes Pixie refuses to nap, which I will delight in reminded her in another 25 years or so. Little one, YOUR TIME WILL COME.