I thought I’d give you guys a little backstage peek at the Brassy Blog.

Obviously, posts need to start with an idea. I go through phases of having lots of ideas, or not even thinking about potential ideas. A lot of culling actually starts at the idea phase. I follow about two dozen blogs and another dozen webcomics, so I don’t really want to talk about something that everyone else has hashed to death. There’s topical relevancy, and then there’s beating a dead horse. And I like horses (well, ponies). On the other hand, there may be a topic I haven’t read recently, but then before I get around to getting the post up, someone like The Bloggess does something similar, and does it better. Can’t follow that, so I ain’t even gonna try.

Another major obstacle to blog fodder is when there’s plenty of stuff going on, but it involves the rest of my family, or maybe friends, and isn’t really my place to share. Like personal stuff that’s theirs. Yeah, these things might affect me, especially when it’s things going on with the kids, but that doesn’t make it about me. Not everything that happens is meant to be blogged (or Tweeted).

If an idea makes it to the writing phase, I start jotting down in one of my notebooks, on my computer, or on the iPad. Most of my recent posts have actually been on the iPad, since I can work on little bits here and there while still hanging out with the kids. (If you aren’t familiar with toddlers, mine at least tend to like my focused attention for a bit, and then they go play and explore and learn all on their lonesome – for about ten minutes. I try to restrict my helicopter tendencies and let the kids do their thing when appropriate, so having the tablet definitely helps me multi-task during the “supervising but not directly interacting” moments.) Given the sporadic nature of my writing time, a post may  not take all that long to actually write, but may take a really, really, really long time to get from start to first draft finished. 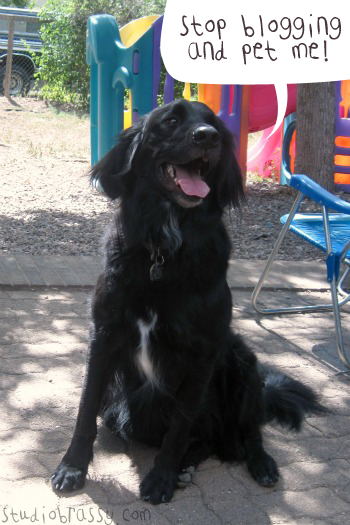 After the draft is done, I need to run spellcheck and proofread, add links, format, possibly re-write chunks (and occasionally scrap the entirety, while wondering what sort of meds I was on when I decided to write it in the first place) and add a picture. Photo processing all happens on the PC, and my camera has… issues, so this tends to be another major hold up. Hell, right now I have seven posts that are written and waiting for photos. Can I post without photos? Sure. But that’s boring.

Sometimes, just for kicks, I start with a photo and then have to write a post to go with it.

Oh, and occasionally I actually draw pictures and post those. I GUESS.

All in all, this process may take about an hour, or several weeks. Close friends and family have probably noticed that there’s a distince lag between when something happens, or when I mention something on Facebook, and when it shows up on the blog. Honestly, there’s a lot of languishing going on between first draft and finished/published. It’s an area I want to focus on improving, along with actually doing more art (and posting it). My son is 7 and 1/2 months old now, so he’s sleeping better, and he plays more interactively with his big sister. I’m also feeling much better these days, especially compared to how sick I was while pregnant, but there are more pressing things on my daily To Do list. So I do the best I can, within the constraints of my priorities. (Yeah, the kidlets and the husband and even the dogs come before you guys. Sorry! C’est la vie!)