Eating From the Dirt: Gourds Editions

It’s a bit late, since my garden is empty now and Colorado is already in its 9 months of winter, but here. Have a post I wrote in early October and didn’t get around to publishing.

I vaguely recall my lovely neighbor, who helped me through pretty much every step of my very first garden, warning me not to go overboard with the seeds during planting. I think I still had a teensy mental block, courtesy of my obvious City Girl status, about how a single tiny seed can grow out of seemingly nothing to something so huge and bountiful (and delicious!). Which means I have a LOT of zucchini and yellow squash in my garden. My understanding is that they are ridiculously easy to grow, in general, and many a home gardener has had to sort out what the heck to do with all those gourds!

There’s definitely more than I can eat all at once, and the kids don’t like them, sadly enough. Actually, I don’t think the Hubbles likes them either. D’oh. I love me some squash though, so I’ve taken to freezing them when I can get the time.* I also let quite a few of them get too large, which makes their skin tough and unpalatable and the seeds large and obnoxious. The smaller ones I don’t even bother peeling or seeding – I eat it all!

Here’s what has worked for me, for any other squash newbies out there.

First, I wash and dry the squash. I’m not keen on eating dirt the neighborhood cats have probably pooped in. Chop the ends off, then peel. Bonus: you can throw your scraps either into your compost or a bag of vegetable bits in the freezer for making your own veggie stock. Chop your squash in half lengthwise, and use a spoon to scrape out the seeds. This only takes me a few seconds. Chop into rings or chunks, whatever strikes your fancy. My chunks are usually about an inch, cube-ished. Heck, you could even cut it into sticks, like carrots, and just eat them raw as a snack if you like. 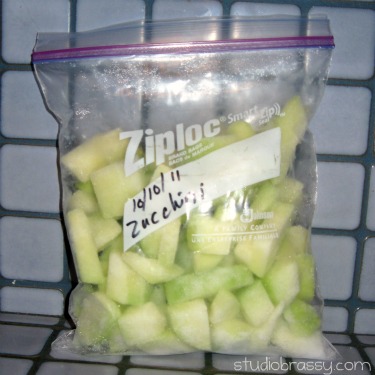 After I’ve chopped them up, I have a choice. Cook now or freeze for later.

For freezing, I line a roasting pan with wax paper and lay out my chunks in a single layer. Put the pan in the freezer for about an hour, then transfer to labelled freezer bags. This step keeps them from freezing into one huge block, and is especially important when you’re doing this with diced onions and peppers. When you’re ready to eat them, cook as normal (I don’t bother thawing).

For cooking, you can steam them, then drizzle with olive oil and sprinkle with salt and pepper. Start with about 3 minutes in the microwave and go from there until you get them as soft as you’d like. Don’t forget water for steaming, and drain before adding your olive oil. If you’d like to roast them, preheat your oven to 450 F, and drizzle/coat with olive oil, salt, and pepper before cooking. Roast for 20 minutes to start, and check for desired doneness. 30 minutes is usually good for most veggies.

If you broil instead of roast, check after about 10 minutes, and remember to stir during broiling.

You can do about a zillion other things with your squash and other veggies, but this should get the newbies started, and I’m not some sort of Squash Whisperer or anything anyhow.

Feel free to share your favorite recipes in the comments!

*Unfortunately, time is not a commodity I have in similar abundance to squashes, so many of them have self-composted on me, and reminded me that I really need to get into composting.