Most who know me personally are aware that I’m a big Nintendo fan, especially the Mario Bros. franchise. As a kid, I loved the Koopa Kids* a lot and was thoroughly disappointed when they seemed to disappear. There was even a Mario Party board that used Koopa Kid** seven times – why not use the seven Koopa Kids?! Silly, silly. Fortunately, the New Super Mario Bros. Wii brought all seven of the original Koopa Kids back along with Bowser Jr. (all eight of Bowser’s devilish little progeny finally together!). Color me a happy little gamer. (And yes, I finally played through an entire Mario game and I totes saved the Princess.)

Wendy O. is not my favorite Koopa Kid, but she’s the one I started with: 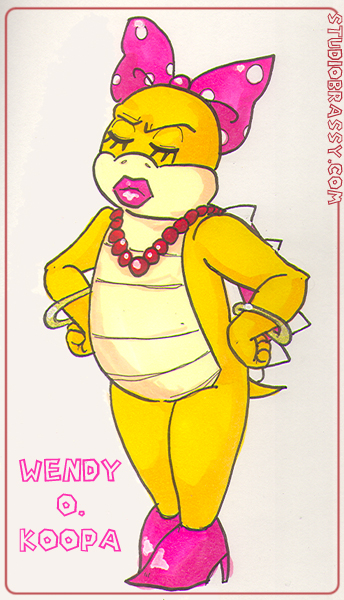 *Koopa Kids are also called Koopalings, and as the link will note: not the same as “Koopa Kid” who is more like a miniature Bowser and predates Bowser Jr.

**Koopa Kid is supposedly not the same as Bowser Jr., which is all well and good, but when I play an older Mario Party Game I certainly don’t mentally distinguish, “Oh, right, that’s the random Koopa Kid, not actually Bowser Jr.” To me, Bowser Jr. seems like a character evolution of Koopa Kid.